Equisetum arvense ,better known as horsetail, is a shrub-like plant belonging to the family of the Equsetteceas and that we can find throughout Europe. It grows naturally in temperate zones of the northern hemisphere and in humid places next to water currents.

Horsetail has fertile and sterile stems. The latter, which grow after the fertile ones and are longer and bushy, are the ones that have the greatest medicinal and agricultural interest because they contain the silicon that helps to strengthen plant cell tissues.

Horsetail, has traditionally been used as a medicinal plant for its healing and anti-inflammatory, regenerative and diuretic properties. It is also used as a natural remedy against fungi in plants because its silicon content creates a physical barrier that prevents the mycelium of the fungus from penetrating into the plant.

Its use as a basic substance has been approved as a stimulator of the natural defense mechanisms of plants since 2014, under article 23 of regulation (CE) number 1107/2009.

Idai Nature, as a benchmark company in basic substances for biocontrol, bets on this extract under the trade name Naturdai Equibasic.

Naturdai Equibasic has authorized uses in horticultura,l fruit trees, red fruits (berries), vine and its effectiveness has been demonstrated in the prevention and control of mildew, alternaria and rust diseases. 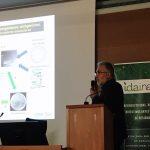 Biocontrol in plant protection: 10 conclusions of the conferenceAgricultural Biocontrol