The integration of Idai Nature in Sapec Agro Business has made this company the only one capable of leading this new global concept.

The Balanced Farming that Idai Nature leads arises from a need to feed a growing population with limited resources via a sustainable model. In addition, consumers are more and more demanding and have shown their preference for acquiring chemical residue-free food, which has resulted in greater restriction of the distribution chain to suppliers when accepting, marketing and offering fruits and vegetables.

At the time of its integration into the Grupo Agro Business group, Idai Nature was already the benchmark biotechnology company and its products could be found in more than 35 countries. With this great evolutionary leap, it has become the only company prominent enough to lead this new concept via its innovative Biocontrol and Biostimulation products.

Its unification with the Agro Business Group, whose turnover has grown from 110 million euros to 300 million euros in the last eight years, has given it a privileged position that will enable it to present the farmers at Fruit Attraction a more ample catalog, the most effective products in the sector and the most affordable prices. 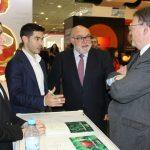