• Management and control of Rhynchophorus ferrugineus remains a major, worldwide challenge for society. Attack by this insect leads to the death of palm trees.

• The optimum temperature for its development oscillates between 15 and 25ºC. The average flight distance an adult can travel is 1.5 km. In general, population dynamics in Spain reach their maximum level in autumn, although a high number of adults may also be captured in spring.

• The insect shows greater preference for the species Phoenix canariensis, followed by Phoenix dactylifera, and then Washingtonia sp. Although no symptoms are observed in palm trees during the earliest phases after the initial attack, the first visual damage is seen as leaf drop (autumn and spring), damage in young leaves (June) and tunneling in the stipe.

• In 2004 all that the public administration could do was remove infected plant matter; however, since 2009, this task has been included in IPM programs. Currently, this is the management practice used to manage this pest, and the Botanical Garden of Valencia is an example of a success story. In this type of integrated methodology, several synthetic chemicals are usually combined with the use of fungi, nematodes and traps with pheromones.

• When chromatic traps are used to capture the insect, it has shown a greater preference for black ones, because the reflectance is very similar to that emitted by palm tree fibers.

• As part of early detection techniques, the use of seismic sensors has been demonstrated as a valid tool starting at the L3 stage. There are other complementary methodologies for these purposes that have also shown interesting results, such as the use of trained dogs.

• The insecticide treatment composed of PIRETRO NATURA + MERAL has been demonstrated to be an effective solution. It is 100% natural and holds organic certification for controlling red palm weevil. It attains the same levels of efficacy as synthetic, chemical active ingredients that are mainly used now and in the past few years for said purpose.

• Laboratory and field trials have shown that with a treatment containing a mixture of PIRETRO NATURA + MERAL, not only is Rhynchophorus ferrugineus controlled in its larval, pupal and adult stages, but it is also effective against the white grub cockchafer (Melolontha melolonhta) and the palm borer (Paisandysia archon), two difficult to control pests with growing relevance due to the death of palm trees that they cause.

• The PIRETRO NATURA + MERAL solution, prepared from botanical extracts, enables residue-free control of the weevil, and is totally compatible with the methodologies used in IPM programs. It is applied by spraying and has no type of conditions for use regarding season, storage or application. 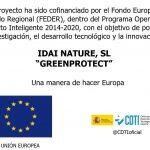