By idaiNature
Posted May 13, 2020
In Agricultural Biocontrol
Aphid on lettuce, what it is and how to fight it naturally2020-05-132020-12-28https://www.idainature.com/wp-content/uploads/2020/06/logo-peque.pngIdai Nature - Especialistas en biocontrol agrícolahttps://www.idainature.com/wp-content/uploads/2020/05/pulgon-lechuga.jpg200px200px

Aphid is a very common pest in lettuce, which can be caused by various genera and species, and which can cause from aesthetic damage, such as stains and deformations, to more serious damage to the plant due to the fact that they feed on its sap and weaken. Both factors cause a decrease in the quality of the product and, therefore, the price obtained from it.

We review the essential points that we must know in order to avoid the plague or, at least, minimize its damage:

. • Annual cycle of the plague:

In early spring and with the temperature rise the eggs begin to hatch. From them come females that lack wings (wingless) and that reproduce without the need for a male to fertilize them (parthenogenesis). A single female can produce more than 150 offspring that can be born with or without wings. Those that lack them will feed on the plant where they were born and the others will migrate to nearby plants.

When the temperatures drop, already facing the winter, a generation with sexual reproduction between males and females (amphigonic) takes place that will produce the eggs that will hibernate until the following spring.

The young take a week to mature and be able to reproduce, so their propagation speed is very high and it is very important to detect it in time to avoid great damage.

They can cause damage of two types:

Being sucking insects, we can easily locate them on the underside of the leaf (bottom) because it is where the cell wall is thinner and it is easier for them to feed.

As always, our best weapon will be prevention:

– Important: eliminate weeds to avoid that aphids can take refuge in them and later colonize our crop.

– Use of aromatic plants as natural repellents.

– Prepare and protect the substrate by providing adequate watering and avoiding excess fertilizer.

– Increase as far as possible the biodiversity of our plot, favoring the appearance of aphid predators such as the ladybug.

We must observe the leaves frequently to detect the pest as soon as possible and, if everything we have put into practice has not been enough, we will use the most appropriate biocontrol strategy to end the pest. 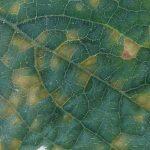 Vine mildew, what it is and how to fight it naturallyAgricultural Biocontrol 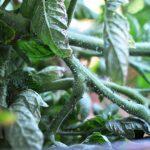 How to naturally eliminate the whitefly on tomatoAgricultural Biocontrol